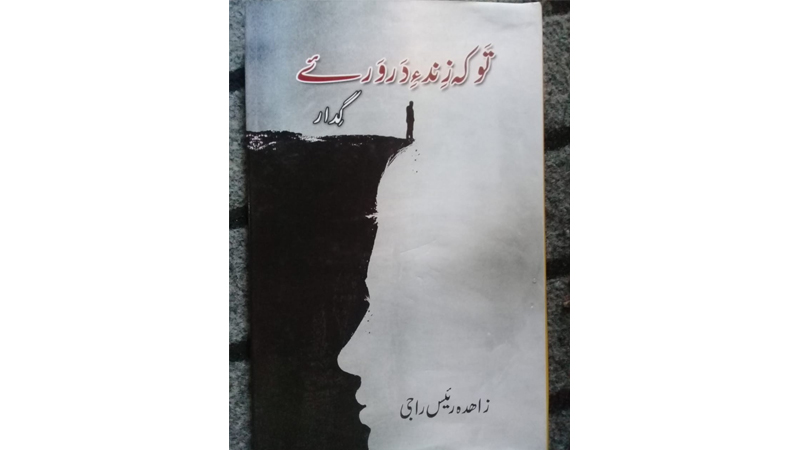 Tou Ke Zinde Darware is a Balochi novel written by a prominent Balochi writer ZahidaRaeesRaji. The book was published by Balochi Academy, Quetta in the year 2019. ZahidaRaeesRajiis currently doing her MPhil in Balochi literature from the University of Balochistan. She is also a poet, researcher and a short story writer. Her works include a compilation of Urdu poetry “Khuwabghoronda”, a Balochi novelette “Paad e cheerezameen” and a short story book “Be kissa ha mana wabnahet”. The title TouKeZindeDarware is a Balochi sentence which says, “As you are the way/example of life.”

The sentence reflects to the main characters of the book, Mehran and Sameen.

This book (Toukezindedarware) is based on a Baloch family along with the care, rancour, personal benefits, qouls (Promises) and their way of living. The book has been beautifully compiled with the perfect description as it deserved.

The story revolves around two disparate Baloch societies; one of the Iranian Balochistan and second of Pakistan’s Karachi’s Baloch society.

The main theme of the novel is the ancestral properties and their unequal distribution. Secondly, it also discusses the love story of Mehran and Sameen (two of the main characters of the book). Mehran was to deal with all; taking the culprits before law to getting the consent of Sameen’s parents to let them marry.

However, Mehran succeeded to give his father, Raees Dad Rahman, get justice, but failed to convince Meer Beebagr, Sameen’s father, for their relationship. Shockingly, Meer Beebagr was compelled to refuse Mehran because Mehran’s mother had already called Beebagr to reject her son for Sameen. Because she wanted to wed Mehran with her niece Nazeen.

Mehran was unaware of her mother’s collision; Sameen was not in the knowledge that Mehran had asked her parents for her. As a result, misunderstandings got birth between the two.

Mehran was wedded to his cousin; Sameen went to London for higher education. The ways of Sameen and Mehran got departed. They both were two broken stars in the open sky.

Most interestingly, Mehran solved all the disputes between him and Sameen. He was in the habit of Sameen and did not give attention to his wife. Gradually, Nazeen, Mehran’s wife, felt she could never replace Sameen and asked Mehran to marry Sameen. But, Mehran’s mother was never ready: and Mehran did not care after knowing the whole game.

Raees Dad Rahman could not bear the daily shootings of his wife when Mehran was out and got heart attacked. Mehran was hurt the most. He kept himself far from his mother and other members. And then Mehran left his home and asked his wife Nazeen to accompany her, but Nazeen’s mother did not allow her. He moved alone.

Now this was a very solemn mode in the novel. Anxiety had seized me wholly of what next would happen. Every part of me was mourning and feeling pity. I was lost in a world of thoughts afterwards.

Mehran did not come back and no one knew where he went. He switched off his mobile. They tried a lot to trace him, but could not succeed. Mehran’s mom regretted a lot. One day when she asked Yalan to again call on Mehran’s old contact, they came to know that Mehran met with an accident and was admitted in the hospital but unconscious. They all rushed there and apologized to Mehran; and agreed with Mehran’s wish to marry Sameen. When Mehran messaged Sameen if she was ready to marry him despite everything that had happened, she replied back ” Toukezindedarware, chon tarajaganabet (As you are the way of life, how come you don’t get a place)”.

The story ended merrily. The whole family got together as dreamt by Mehran’s late father Raees Dad Rahman. Sameen and Nazeen both lived happily with Mehran thereafter.

This was the best Balochi novel I have read ever. Because, miss Zahida has beautifully brought the variety of taste in her contribution with real feelings put in each sentence. I was truly inside the story. I appreciate the skills she has been blessed with.

Therefore, I strongly recommend every Balochi reader to purchase the book of ZahidaRaees and read it. It is surely going to enhance your interest in reading more books.

The writer is a former teacher based in Turbat and a student at University Law College, Quetta. He can be reached at alijanmaqsood17@gmail.com and Tweets at @Alijanmaqsood12